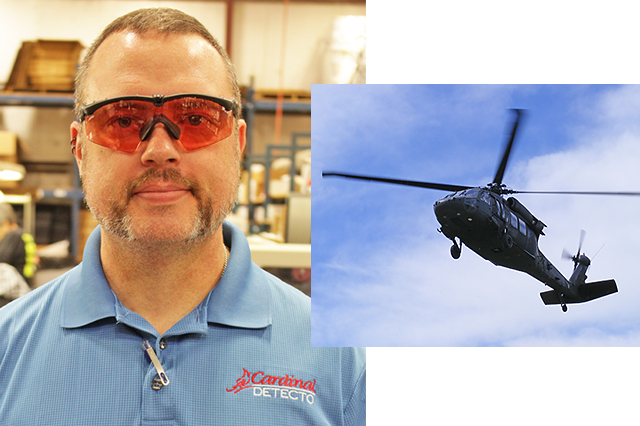 ​Cardinal Scale employs a varied and colorful cast of characters with some very select and special talents. This employee spotlight feature is no different, and we profile Electronics Department Supervisor Josh Hailey’s past military service and some of the special skills he picked up along the way.

Josh was born and raised in Joplin, MO, and graduated from Joplin High School in 1995. He spent one year in college, studying History and minoring in Philosophy and Russian Language. He then decided to join the Naval Reserves, operating heavy equipment like bulldozers, loaders, graters, and rollers for seven and a half years. Josh then heard about the opportunity to fly helicopters for the National Guard and decided that would be a worthwhile endeavor.

His training for being an “aviator”—the official term for those involved in any flying occupation in the military—took place in Fort Rucker, Alabama for a year and a half. Once Josh finished with training, he received a job flying helicopters for a maintenance unit based in Springfield, Missouri, where he worked for six years. Josh’s unit was directly involved with aircraft from a 15-state region. In addition to his maintenance duties, he gave VIP flights for Colonels and Generals when needed.

Josh’s military service came to an end in 2011 after spending 15 years with both the Naval Reserves and National Guard. At the time, needed flights were becoming more and more scarce. “A lot of us were running out of flights, and I had to leave due to lack of work,” said Josh.

Josh found a job through Brinks Security directly after his military service, driving a truck to Springfield everyday for a few years. After Brinks, Josh started work in Cardinal Scale’s Service Department, where his technical skills easily lent to problem solving and troubleshooting scale returns for Cardinal/Detecto products.

“I can remember my first day pretty clearly. Jim (Grunst) was showing me how to test a 205 and power went out in the Royal Building. The comedic timing of that incident was almost too perfect,” states Josh.

Josh enjoyed the Service Department work due to the wide array of older scales that seemed to pop up from time to time. “Most of the products that were reasonably current were easier to work on just due to the repetition. But that wasn’t always the case. A good example would be calls I would very rarely receive regarding our Airport Scales that were sold for a time in the 1980s. Assisting a customer over the phone with one of those is really interesting because you don’t really have much experience with older scales like that.”

Josh’s excellent service provided him the opportunity to be promoted to Electronics Supervisor, earlier this year. The Electronics Department builds the indicators, remote displays, Satellite applications, junction boxes, and some of the smaller scales manufactured by Cardinal/Detecto. Josh’s new position allows him to oversee all of these processes and provide Cardinal/Detecto products with the advanced technology customers have come to expect.

Away from work Josh spends time with his son, Trevor, 25; daughter, Alexi, 22; and daughter, Sarah, 15. He’s been married to his wife, Star, for 16 years, who works as the Head Cook at Carl Junction Intermediate School. In his spare time, Josh likes to play frisbee golf with Trevor, and makes the occasional trip to watch Sporting Kansas City of Major League Soccer.

Josh also likes to attend comic and entertainment conventions. People gather at these conventions to collect comic books and collectables, to meet celebrities and writers, and to build and display costumes as an homage to their favorite characters. Josh started attending Kansas City’s Planet Comic-Con with his father and brother when he was younger. More recently, he has attended some conventions in Tulsa and got to meet John Bernthal, who played the character Shane in the “Walking Dead.”