Stacking the Deck in Favor of Efficiency: Western Scale’s Answer for Apple Processing 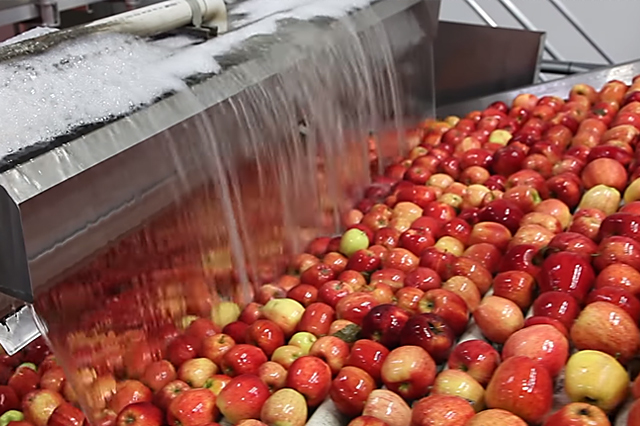 ​Western Scale of Selah, WA services industrial scale weighing operations for central and western Washington. Washington’s climate provides an environment rich in growing produce, so there are many industries that require solutions to aggregate, clean, and pack fruits and vegetables in an efficient, cost-effective manner. Western Scale is more than happy to help customers with novel produce-processing systems that are capable of being customized to an individual company’s needs. Western Scale, in tandem with Cardinal Scale Manufacturing Company, provides a unique solution for these type of applications.

Western Scale has developed an interesting system called the Destacker and incorporated weighing into it for a more efficient process. Jeff Wetmore, in collaboration with his Cardinal Scale Regional Sales Manager, developed the Destacker to weigh cherries and apples in a speedy and calculated manner. The Destacker does exactly what its namesake implies: taking large individual bins stacked vertically, four high, and separating them into individual bins for proper weighment. Cardinal Scale’s 205 indicator, 225 indicator, WinDDE software, RF1 wireless transceiver, and floor scales are all utilized in the building of the Destacker, or included in the final weighing process. This system is used primarily in fruit-harvesting operations around Washington, and is rapidly being replicated to great success. Jeff has placed more than a dozen of the Destackers in service in Yakima, WA, alone.

The Destacker takes four large crates or bins that are filled with apples and separates the bins individually to be weighed. Each of the bins is weighed on large Cardinal floor scales, where gross and net weights are taken from the bins, ticket weights are printed, and total net weights are then transmitted from the 225 indicator via the RF1 wireless transceiver to Cardinal Scale’s WinDDE software that compiles production weights in an Excel spreadsheet for recordkeeping.

The next step is quality control. The apples are moved onto conveyors to check for blemishes and defects. Apples that are free of defects are then sorted through an automated system according to their size and color. A sticker is applied to mark the apple’s variety, and then further down the conveyor system, apples are dropped onto specific conveyors through a visual identification system. Cardinal Scale’s 205 indicators, in combination with conveyor scales, then show weights for finished bags and boxes for operators who are completing the packaging.

The Destacker is part of an efficient, integrated system that processes a high-volume amount of apples at a rapid rate of speed that end up being shipped all over the world. “Our customers sell fruit domestically and internationally. Being able to weigh raw product, clean, process, and weigh finished shipments is of great value. The Destacker and the various Cardinal indicators help process and track shipment weights at an incredible speed,” says Jeff Wetmore, Owner/President of Western Scale.